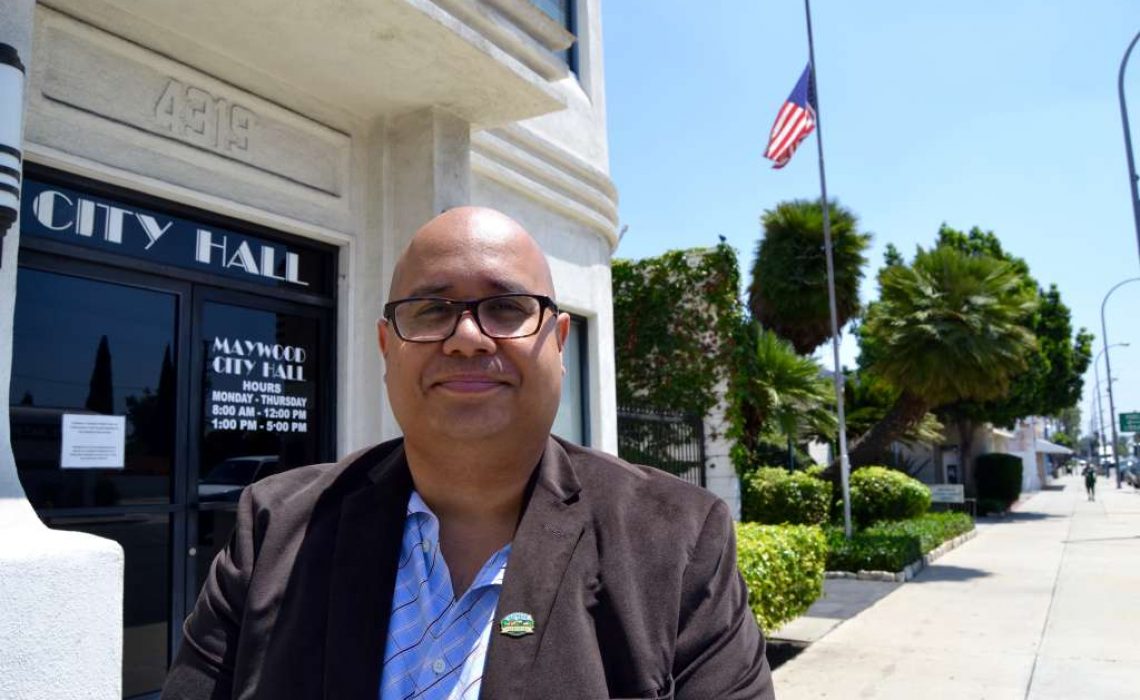 Eduardo “Eddie” De La Riva is a founding father for the UCLA Eta chapter of Gamma Zeta Alpha Fraternity, Inc. Eddie is a Program Manager for UCLA Youth Source Center and is also a council member for the city of Maywood, California.

1. What drew you to GZA?
[Eddie]: The emphasis placed on values like community service and the maintenance of the Latino culture were very important in attracting me to the fraternity. I found out about Gamma Zeta Alpha through an email from a professor sent to students, which was a message relayed from the Director of Expansion at that time, and I proceeded to get in contact with the director of expansion.

2. What advice would you give to those that are hesitant about going Greek?
[Eddie]: This brotherhood is not like any other club or org that you’ll ever join, no other brotherhood runs deeper. The brothers have been apart of my life since 1999-2000 when I first began pledging. Even with help on my campaign in 2013, brothers that I knew and brothers that he had never even met helped him reach his goals.

3. What positions did you hold during undergrad?
[Eddie]: I was never really involved with any other groups on campus, Latinos were very limited in things they could get involved with. The fraternity allowed for me to have a connection with the campus, holding the Chapter president position and being a part of the fraternity helped bring out the leader in myself.

4. What other organizations, besides GZA, were you in while doing your undergrad?
[Eddie]: During undergrad, I worked as a student supervisor in the dining halls, where I started out washing dishes and moved up to a supervisor position.

5. What skills did you pick up while running a chapter helped you in your professional career today?

[Eddie]: Robert’s Rules of order is very crucial outside of the fraternity, you see it in many professional settings. The professional development that the chapter and fraternity provided helped me develop as a better leader.

6. What keeps you going through tough times?
[Eddie]: Family, family is the biggest support system someone can have. As of lately in the city, it has been some trying times but being able to serve my community and having a positive impact on the lives of many people from Maywood motivates me every day.

7. What’s the most important leadership lesson you’ve learned?
[Eddie]: Lead by example. A good leader can lead by example and teach people how to do a certain task or conduct themselves in a certain manner.

8. Can you tell us the importance of networking and how GZA might have played a role in the creation of your current network(s)?

[Eddie]: It’s not what you know but who you know. Gamma Zeta Alpha helped me know someone in almost every professional sector that can help me with issues that I might have personally or through my own work. I highly encourage all undergraduate brothers to go out meet and get to know as many alumni brothers as possible.

9. What is your favorite event that GZA puts on?

10. Looking back to when you first started college, is this where you envisioned yourself?

[Eddie]: Yes and no, I had no clear idea of what I wanted to do, but I knew I wanted to help people regardless. I wasn’t really sure about my involvement in politics until I got to UCLA and manifested my passion into my current career.

11.Knowing what you now know…If you could switch places with an undergraduate student, would you do anything different?

[Eddie]: Definitely, I would travel a lot more and study abroad, because I have regrets of not doing that. You get a new and better perspective on life through traveling and teaches you what truly matters in life.

12. What advice do you have for an undergraduate brother?
[Eddie]: Follow your passions and do what you love or else you won’t be happy. Never forget where you came from, give back to your community, people, brothers, and so on. We desperately need more people with that mentality. Very few people actually go back and give to the communities that they come from, which is why it’s paramount that we contribute to and lead our communities. In politics, it’s hard to find good and caring people that actually want to help the communities they serve because so many people are in politics for the wrong reasons.

13. Looking back to college, what were some resources you used to advance yourself in academic and career development?

[Eddie]: I did not take full advantage of the various resources on my campus in particular, but once I became a brother, I developed good relationships with the fraternity’s network.

14. Have you kept in touch with any professor, mentor, or boss that helped you advance yourself? If so, what is the main thing you are grateful about the lasting relationship?

15. Already having the college experience here at UCLA, what strengths/weaknesses do you think our public institution has in comparison to other top universities?

[Eddie]: I don’t really see any negatives with UCLA, they have done an excellent job of putting out their brand to the world. A degree from UCLA carries a lot of weight in the world, and I see that in politics because UCLA teaches students to give back and you see a lot of Bruin Alumni all across politics.

16. What characteristics define a strong graduating senior? What are some things that you would personally look at to rank students?

[Eddie]: Someone who’s traveled, has strong experience (volunteer, work, internship), and who is very involved in different organizations. After college, everyone judges you based on the things you did during undergrad, not your grades (for the most part). It is very important to ask yourself if you are taking advantage of the opportunity you have/had at the university.